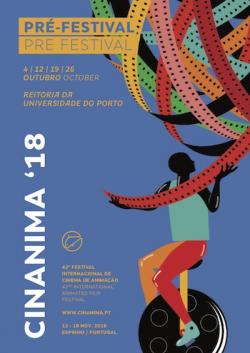 The cycle called "Pre-Festival" will run from 1 to 31 October and is free for the academic community and general public. The "Pre-Festival" consists of four programs that include award-winning films from CINANIMA’s 2017 edition, a selection of the best contemporary Finnish animation, films from Polish festival O! PLA and Dan Laoghaire College of Arts, Ireland.

The 42nd edition of CINANIMA takes place from November 12 to 18, in various spaces in the city of Espinho. In the Rectory of the U.Porto, the Pre-Festival Cinanima takes place in four dates of October: