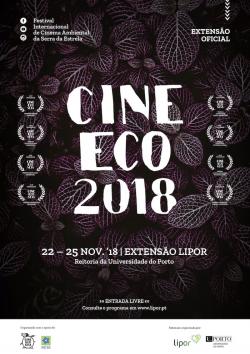 Lipor and its Associated Municipalities, in partnership with the University of Porto, is promoting a CineEco Extension from November 22nd to November 25th. Considered one of the oldest and the only environmental film festival in Portugal.

The International Environmental Film Festival @ Rectory of the U.Porto

CineEco has been held continuously since 1995, promoted by the municipality of Seia, and presents the latest national and international productions on environmental themes. The sessions are free and open to the public. Each session will be followed by a debate, with a moderator, to promote the debate and the exchange of ideas concerning the films shown and the topics addressed.

During the CineEco Extension at the University of Porto, there will also be an area dedicated to the younger ones, taking advantage of the animated films presented in the 2018 edition of CineEco. To complement the exhibition of the animation movies, it will be organized a hands-on activity to promote environmental awareness with workshops and environmental games.